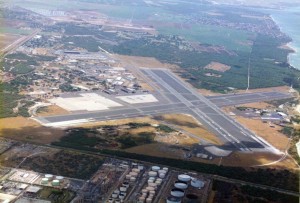 Barbers Point Naval Air Station was developed by the U.S. Navy in 1939 as a mooring station for airships.  During World War II, both Ewa Marine Corps Air Station and Barbers Point NAS operated from the 3,709 acres. It was also the home of the Barbers Point Coast Guard Station.  In 1996, the three runways handled about 46,000 air operations.

Kalaeloa (long point) is the original name for the southwestern tip of Oahu and was given to the airport by the Hawaii Department of Transportation and the Barbers Point Redevelopment Commission in the mid 1990s when the future of the former Barbers Point Naval Air Station was being debated.

Because the U.S. Navy had named the airfield after Commander John Rodgers who made the first attempt to fly from San Francisco to Hawaii in 1925, the Hawaii Department of Transportation chose to continue this tradition hence the designator JRF.

A Kalaeloa Airport Master Plan was published by the HDOT in November 1998.  The master plan was completed with the assistance of the Redevelopment Commission to determine the combination of airport facilities that would best balance the needs of aviation users with other potential uses of the surplus land. The master plan recommended:

In addition, the Hawaii National Guard would have airfield access from its 160-acre reservation at the north end of the airport and the U.S. Coast Guard would continue to have airfield access from its 48-acre complex at the south end of the airport.  Hangar 111 and about two acres of paved parking were transferred to the University of Hawaii, for aviation training.

The state accepted 757 acres of surplus land at Barbers Point Naval Air Station as Kalaeloa Airport on July 1, 1999 for use by general aviation aircraft to practice pilot training, formerly done at Ford Island and Honolulu International. A perimeter fence was constructed prior to the U.S. Navy turning over Kalaeloa Airport.  The fence was necessary due to Federal Aviation Administration operational and security regulations.  The fencing was completed prior to July 1, 1999, allowing for general aviation operations on the turnover date.  Cost of the fencing was $1.1 million.

The airport has air traffic control functions from 0600 to 2200 daily but is available as an alternate 24/7/365 and has full daily fire fighting capability. Users are the U.S. Coast Guard, Hawaii Community College Flight Program, Hawaii National Guard and the general aviation community.

Kalaeloa Airport provides a launch site for Coast Guard Search and Rescue operations, a training base for general aviation, an emergency response platform, alternate landing site for airlines and the military, and extension of the capacity of HNL.

Four of the buildings on Kalaeloa Airport are eligible for the National Register of Historic Places because of their distinctive architecture.  These are the Air Traffic Control Tower (Building 4), Hangars 110 and 111; and maintenance building (115) which was originally a torpedo assembly and maintenance facility.

Kalaeloa Airport will continue to be a link to Oahu’s World War II history while continuing to serve civilian and military aviation needs.