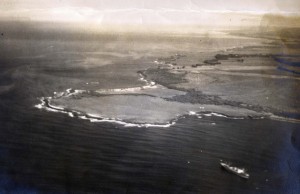 In the early 1920s the U.S. Signal Corps and U.S. Army Air Corps used a portion of land near Port Allen as a landing strip (Burns Field). A Signal Corps reservation adjoining the airstrip housed personnel operating a communication station on the airfield.

The 1928 Legislature appropriated $15,000 to purchase land at Port Allen to establish an airport. The Territory purchased 29.35 acres of land in Port Allen for this purpose.  The land was adjacent to the Army’s Burns Field which occupied 67 acres of land.

The land was conveyed to the Territorial Aeronautics Commission by Executive Order No. 330, dated April 24, 1928.

On June 8, 1928 a meeting was held by the Territorial Aeronautics Commission to select a site for a main airport on the Island of Kauai.  The TAC proposed combining the Territorial land with the Army land for the airport.

The Army portion was partially cleared and though the ground was rough, safe landing could be made.  The runway was approximately 500 feet wide and 2,000 feet long.  The Territorial portion of the field needed to be cleared and graded to conform to the Army section.  Fresh water needed to be piped to the field and a wind cone erected.  The TAC recommended that these improvements be made at once.

On October 24, 1928, the TAC formally requested the Superintendent of Public Works to call for bids for the grading and clearing of the entire Army and Territorial landing field and that an alternate bid be called for the clearing and scarping of the runway.

The first passenger air service to Kauai was inaugurated by Inter-Island Airways on November 11, 1929, on a twice weekly schedule to Port Allen Airport using Sikorsky S-38 amphibians.  The fare was $20.

A contract for $1,200 for development on the Port Allen Field was let on March 31, 1930 by the Army.  By mid-1930 the field was in the shape of a “V”.  The new runway was twice as wide as the old one.  There was a 300-foot wide cross-wind take-off towards Territorial property.  The County of Kauai put in an asphalt macadam road up to the edge of the airport.

In July 1930 the U.S. Weather Bureau established a weather reporting station at Port Allen.  This step constituted the first expenditure of federal money in Hawaii in the interest of commercial aviation.  Runways were set-up and extended in 1930 using prison labor.

On September 25, 1930, the TAC received Executive Order No. 431 settling aside 81.036 acres land to be known as Hanapepe Airport under the control and management of the Territorial Aeronautical Commission.

The HAC agreed on February 18, 1931 to an Inter-Island Airways request to install a loading strip of asphalt macadam for passengers and fencing surrounding the loading platform providing that the airline confirm that it was going to use this field as a permanent airport.

In 1931 the Territorial Legislature appropriated $35,000 for an airport more centrally located at Wailua.  Inter-Island Airways schedules had increased to three weekly, serving both Wailua and Port Allen.

Inter-Island Airways was awarded an airmail contract from Honolulu to Kauai on October 8, 1934.

In  the 1935 annual report the Superintendent of Public Works reported that the airfield at Port Allen was on sparsely-grassed rocky soil.  The Army maintained a barracks at the field.  This field was used every other day by Inter-Island Airways.  The principal needs were grading, paving and clearing.  Port Allen Airport consisted of two runways, 3,600 and 2,600 feet long and approximately 89 percent of the grading has been completed, with about 25 percent of a stabilized base course laid.  Inter-Island augmented its service with larger 16-passenger, S-43 amphibians in 1935 and 1936.

In 1938, the Civil Aeronautics Administration restricted the use of Wailua Airport declaring it unsafe for larger aircraft, and Inter-Island Airways moved its operations back to Port Allen. The S-43s together with DC-3s which were placed in operation in 1941, served the Island of Kauai through Port Allen until the field was closed at the outbreak of World War II.

The proposed exchange whereby the U.S. Army gave up the southern portion of their present reservation and, in exchange, received from the Territory of Hawaii 17.82 acres in the northeast corner of the field, was sent to the Commissioner of Public Lands for execution.

No appropriation was made by the 1939 Legislature for Territorial airports, so all construction ceased during the 1939-1941 biennium as only the Aviation Gasoline Tax was available. In the past year the tax amounted to $13,599.

Prior to World War II $127,100 had been spent on various WPA projects in clearing, grading and paving at Port Allen Airport.  In 1941 the CAA recognized Port Allen Airport by allocating $225,000 for its reconstruction.  Because of war conditions the funds were never expended.

On March 29, 1941, Governor’s Executive Order No. 931 set aside 180.97 acres for Port Allen Airport to be under the control and management of the Superintendent of Public Works.

Act 35, SLH 1941, appropriated $6,000 for a Control Tower and the CAA completed a radio range beacon and weather station at Port Allen Airport.

At the outbreak of the World War II, Port Allen was taken over by the military and, as a safety precaution the runways were plowed up to prevent possible use by the enemy.  During the war, Kauai’s aviation needs were served through the Air Force field at Barking Sands. 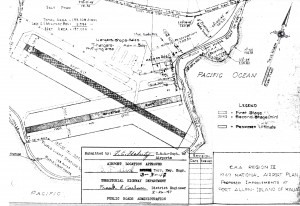 Upon termination of hostilities, the field was regraded and opened to small aircraft operation.  In lieu of restoration, the Army paid the Territory an amount of $17,500 and the Territorial Legislature by Act 23, Session Laws of Hawaii 1947, provided a like amount for paving and developing it into a suitable field for use by charter or privately owned aircraft.  Only minimum facilities for the convenience of operators and passengers were available.  It was believed that when Lihue Airport was constructed, service to Port Allen would continue to be offered by unscheduled operators and that such competitive service would be in the interests of the people of the Territory.  Scheduled airlines under CAA regulations were still required to continue service from Barking Sands.

“Port Allen is in a most favorable location for the accommodation of private flying,” the Superintendent of Public Works wrote. “At the present time seven small planes are based on the field.  The availability of Port Allen and the proposed airports at Lihue and Hanalei would prove a great incentive to the development of private flying on Kauai.

In February 1948 a contract was entered into between the Territory and the Nawiliwili Transportation Company of Kauai for the paving of a runway 2,500 feet in length, an aircraft parking apron and connecting taxiway.  This work was completed on May 22, 1948. Cost: $33,344.  By mid-1949 the status of Port Allen Airport after the new Lihue Airport opened had not been determined.

By mid-1950 the following installations occupied space at the airport:

Routine maintenance and repairs to the building and paved area was performed throughout the year, but no major projects were undertaken during the period.

On September 25, 1950 the HAC approved relinquishing a strip of land at Port Allen Airport approximately 8,800 square feet in area for use by the County of Maui in road construction.  This was affirmed by Governor’s Executive Order No. 1395 dated October 11, 1950 which withdrew 0.203 acres of land from Port Allen Airport for realignment of the public road in Hanapepe.

In December 20, 1950, Governor’s Executive Order No. 1405 withdrew four acres of land from Port Allen Airport for Salt Pond Park.  On June 25, 1951 the County of Kauai requested an additional parcel of airport land be transferred to them to develop a park.  It was decided that if the CAA approved, it would be leased to the county.  The county would be required to fence the park to keep cars off the runway.

A project to rehabilitate the runways was completed at a cost of $33,457.

Economic pressure gradually forced the non-scheduled operators to suspend operations, and by 1954 only two continued to serve the airport: Cockett Airlines and Andrew Flying Service. Numerous private planes were based at Port Allen in the 1950s, among which were aircraft used for aerial photography and to assist commercial fishermen in spotting fish. Other than the landing areas and a public waiting room with toilet facilities, the physical improvements by 1955 included three privately owned hangars and an office building.

Security fencing was installed at a cost of $132,000 in 1984.  The project was designed to keep out intruders and allow small plane operators to occupy a more secured facility.

A new Master Plan for Port Allen was proposed by the State in 1990 to allow helicopter operators to obtain leases for the construction of maintenance and passenger facilities.  To obtain community input, a task force consisting of the operators and local citizens was created to review the findings of the consultant preparing the plan.  The Master Plan considered three alternatives: maximum development, exemplified by the extension of the runway, terminals for helicopters and fixed wing aircraft and 12 helicopter parking pads; Moderate Development, exemplified by the long term lengthening of the runway and the construction of five helicopter and two fixed-wing aircraft lease lots; and No-Action.  Due to the considerable community opposition to the development of the airport, the 1990 Master Plan essentially reflected the No-Action Alternative.

Helicopter operations began at the airport in November 1997. A native Hawaiian salt gatherer filed a suit to stop helicopter use, claiming the improvements may have significant effect on the salt ponds due to noise and dust. An environmental assessment was prepared for Port Allen Airport in December 1997. Helicopters began operating again from Port Allen on June 1, 2000.

The Port Allen Airport Master Plan Update was released in August 2001.  The proposed updated Master Plan consisted of the following improvements to meet the demand forecasts to the year 2020.  The components to the plan were:

“While transporting helicopters by truck was safe,” the report stated, “having helicopter hangars at the airport would be safer and more efficient. Maintenance and overnight storage of helicopters on the landing pads is not an efficient long-term use of the pads, and is no substitute for permanent and secure hangar facilities.  The construction of four helicopter lease lots and accompanying aprons would allow helicopter operators to base, operate and maintain their aircraft at the airport.

“The lots would be leased to helicopter operators and allow the airport based operators to build hangar facilities and modest passenger processing facilities.  This would allow a total of eight helicopters to be based at the airport on the improved lots.  The existing temporary office trailer would be removed and the existing above ground fuel storage tank would be relocated to the lease lot area.  Refueling would be allowed at the east lease lot, either by a privately-owned fuel tanker truck or above ground fuel storage tank.  Utilities would be provided to the lease lots; prospective tenants would be required to provide landscaping for any facilities to be constructed.”

The proposed improvements were intended primarily to allow existing users to hangar their aircraft at the airport rather than at off-airport sites and to accommodate the modest growth forecast.

One hundred twenty-two acres of Port Allen Airport land are ceded lands under the public trust.