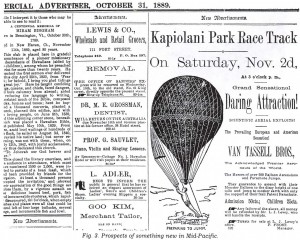 The first successful aeronautical incident in Hawaii took place eight months after Emil Melville’s failure. Professor Joseph Lawrence Van Tassell came to Honolulu from Fresno, California, where on October 3, 1889, he made an impressive balloon ascension. Hawaiians were pleased at the prospects of witnessing either the first successful conquest of the air in Hawaii, or another sideshow as Melville’s display turned out to be. Promises of being so entertained in an otherwise placid tropical life drew no complaints at the admission charge of 50 cents for adults and 25 cents for children. As the launch date of November 2 drew nearer, interest and ticket sales mounted. Hawaiian Tramways Company offered their help to spectators by running cars to the site, Kapiolani Park, every half hour throughout the day.

About five hundred spectators showed up at the paid section of the park but there was a much larger crowd of people on nearby hills and fields. Many sat atop Diamond Head and immediately behind Kapiolani Park. All afternoon the Royal Hawaiian Band played spirited music; the weather was excellent, the wind unusually calm.

As Melville had done before him, Van Tassell constructed a wind breaking wall adjacent to the furnace. The lack of wind that day, however, made the wall unnecessary and part of it was taken down before the ascent.

Inflation proceeded without difficulty, using a compound of hot air and gas. At 4 o’clock the balloon rose into the air as Van Tassell made himself comfortable on his trapeze. The balloon continued upwards to a point one mile high. Excited crowds watched the aeronaut until he became a small speck in the sky. Using binoculars, some people observed him working to free several ropes preparatory to cutting loose so he could descend by parachute. His movements caused the balloon to descend somewhat, so Van Tassell quickly cut loose. Coming down gracefully, he landed well off his mark about 200 yards from his starting point, much to his chagrin.

This first assault on Hawaiian skies drew raves from newspapers and the thousands who had seen history being made. When Van Tassell promised a special show to honor their monarch, King Kalakaua, on his 53rd birthday, he had no trouble selling tickets. For this spectacle the 26-year-old aeronaut from Salem, Ohio, promised to ascend from the crater Punchbowl then parachute to a landing in the palace grounds. On the launch date, November 18, another first in transportation was unfolded in Honolulu. Industrialist Benjamin F. Dillingham officially opened a railroad and gave 4,000 residents free rides on “Dillingham’s Folly” over a nine-mile course.

When Van Tassell and his partner, Joseph Lawrence, arrived on the scene they were disturbed to find strong winds about. Lawrence, younger of the two, elected to make the ascension. At the insistence of friends, the aeronaut donned a life jacket. Prior to ascent, however, it was removed. At 2:17 p.m., Lawrence gave the “let go” order then ascended rapidly to a height of several thousand feet. Perched on the trapeze, he waved to the cheering crowds. Drifting to a point above the intersection of Richard and King Streets, Lawrence cut loose and began to descend by parachute as promised. Suddenly, however, he was lifted higher in the air and began to be taken toward the sea. The helpless man was borne almost five miles from Punchbowl and fell into Keehi Lagoon about two miles off shore. Five minutes later, the balloon also settled into the lagoon.

Sitting idle nearby was the tug ELEU. For the lack of built-up steam, it was useless. Captain John Rice worked frantically but it took 30 minutes to reach the disaster area. Rice and his passengers (promoter Frank Frost, Van Tassell, and news people) searched for almost two hours. No trace of the aeronaut or his parachute was found. The balloon was later fished out of the water and taken to shore.

The populace, struck with the plucky aeronaut, was dismayed by his tragic death. One irate resident, in a letter to the local newspaper, deplored the lack of emergency ships on patrol and demanded an investigation.