In 1944 the Territorial Department of Public Works proposed that an airport for private flying be created by a combined coral dredging and fill project on the reef between downtown Honolulu and the Waikiki section of the city.  Such an airport was proposed in the planning report submitted to the 1945 session of the Legislature by the Territorial Post War Planning Advisory Board. 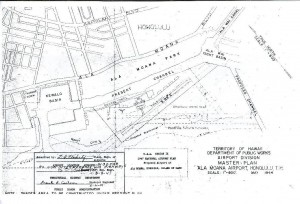 The project was to be located on tide lands approximately 1,000 feet south of Ala Moana Park, 1.5 miles from the Honolulu Post Office and six miles from the existing John Rodgers Airport.

The development was solely in the interests of beginners and private owners and was not to be used for commercial flying, other than student training or charter flights.  The site could be enlarged at a nominal cost into a field with two 4,000 foot runways capable of taking any two engine ship such as were now being used by Hawaiian Airlines.

A further extension to 5,000 foot runways could be made if and when John Rodgers Airport became overcrowded and additional landing facilities for four engine plans was required.

The CAA was considering applications from six or more airlines, both domestic and foreign, for trans-Pacific service, also applications from several mainland commercial airlines for service to and from Honolulu.  They concluded that there would be a large number of heavy luxury planes and heavy freighters landing and taking off from John Rodgers.  It was also anticipated that the airlines would protest and exert all possible pressure to force student and private flying off the airport.  Small planes were a definite hazard in this case, and it “is the opinion of the DPW Airport division that the Territory will be forced by economic considerations and by pressure from various interests to make such a ruling,” the Superintendent of Public Works reported.

“Assuming that small planes are forced off John Rodgers, the proposed site is an ideal location for such planes.  It is bounded on the west and south by open water, on the east and north by the yacht basin and Ala Moana Park.  It is far enough away from the residential district so that plane noise would not be a nuisance; also the prevailing wind will tend to carry such noise out to sea. There will be no cost for land, as all land required is owned by the Territory.  The project can be enlarged to meet future requirements.”

The DPW completed preliminary plans and estimates, and indicated that it could complete final plans within 60 days after an appropriation was made.

The estimate for construction of ground facilities was $290,000 and $25,000 for buildings.  The CAA was expected to fund the ground construction costs and the Territory the buildings cost.  A request for the funds was sent to the 1945 Legislature but no appropriation was made.

The Post War Planning report concluded by saying:  “The proposed project is vitally necessary to encourage civilian flying; it will have an important place in an existing recreational area; it will eventually be self-supporting; it can, when necessary, be developed into a major airport.  In our investigation, this site seems to offer the best location for an airport for the purposes intended. It will be convenient to the center of the Oahu island population and reasonably cheap to develop.”

The entire subject of private flying on Oahu was discussed in the “Kipapa Field” section of this report.  It was recommended that the Kipapa, Haleiwa, Kahuku and Bellows Army Fields be utilized for private flying purposes and that the Ala Moana Project be carried out at an appropriate time in the future.

The Ala Moana site, according to the DPW, was satisfactory from an aeronautical point of view and construction considerations.  The cost of the project would be relatively low and the success of the airport as a private flying center would be assured from the start.  The project is favored by the most responsible established flying schools and aviation interests.

“It is believed that after two or three years use of the combination of Kipapa, Haleiwa, Kahuku and Bellows Fields for private flying the general public of the island will realize the importance that Ala Moana Airport would have as Oahu’s private flying center.”

Although the proposed airport was included in the Planning Board Report, the project received no recognition from the Legislature.

A Master Plan for Ala Moana Airport was approved by the CAA Region IX as part of the 1947 National Airport Plan as submitted by the DPW on March 3, 1947. The runway was located makai of Ala Moana Park and consisted of a single runway 3000 feet by 75 feet.