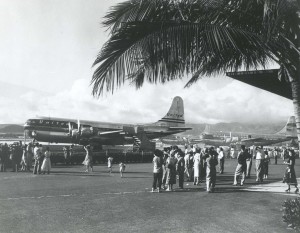 When United Air Lines inaugurated Stratocruiser service from Hawaii to the mainland in 1950, Honolulu was linked directly with 87 mainland cities. In November, 1964, UAL installed in-flight movies for ocean-overflying passengers.

From the mid-1960s through 2006, United expanded its Hawaii service with larger aircraft, with flights to the outlying islands and with daily service to Honolulu from Osaka and Tokyo. 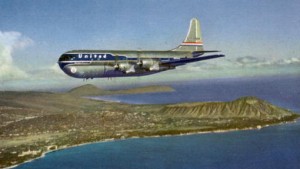 In the 1960s, United was operating DC-8s to Hawaii and was continuing to set industry records for the longest flights in the United States.

In the early 1980s, United brought in DC-10s, and began launching nonstop flights from the mainland to Maui, Hilo on the Big Island and Lihue. Boeing 757, 767-300 and 777 aircraft eventually joined its Hawaii service.

By continually increasing the size of aircraft on its Pacific routes, United was able to boost passenger numbers. In 2005, United flew 1.7 million passengers and 99 million tons of cargo to the Pacific state.

By 2006, its 59th year of service to Hawaii, United was flying there nonstop from six U.S. Mainland cities, including San Diego, Seattle, San Francisco, Los Angeles, Denver and Chicago.