Air Corps in the Hawaiian Islands 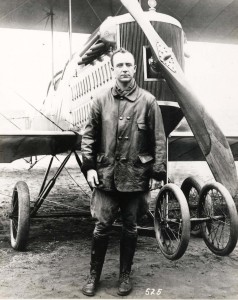 The Hawaiian Air Office was activated in the Alexander Young Hotel, Honolulu, on November 20, 1916. A special staff section of the Hawaiian department, it was placed under the leadership of an infantry lieutenant until a qualified air officer arrived.

Captain John F. Curry was selected to command the 6th. At the time, he was a pilot with the 1st Aero Squadron which was part of the Pershing Expedition into Mexico. He commanded the aviation detachment at General Pershing’s headquarters at Colonia Dublan about 115 miles below the border.
Now a retired major general, Curry recalled: “As I had no idea of the plans contemplated for coast defense in the Hawaiian Islands, I wrote to the Office, Chief Signal Officer, requesting that I be ordered to Washington for conference and instructions. In reply, I received a wire disapproving this request due to lack of mileage funds and giving me no instructions as to what was desired and ending as follows: ‘This office relies on your initiative, energy and discretion to carry out its plans. You will proceed at once.’”

The young flyer arrived in Honolulu on February 13, 1917.

“On arrival I found that there were no plans, nor any instructions awaiting me, nor was there anyone in Hawaii who had any idea of what the War Department wanted. I felt free, therefore, to make all necessary arrangements and plans for the establishment of an aerial coast defense base.”

Curry reasoned that “the air force will act similarly to a long range coast artillery weapon” and that “defense of the Hawaiian Islands will be primarily from the air and will be based on the bombing and restriction of enemy fleet and transports before a landing on Oahu can be effected.”

Within a few days of his arrival, Curry learned that he would receive Curtiss N-9 seaplanes, single engine biplanes which carried a two-man crew, that could attain a top speed of 70 miles per hour with engines rated at 100 horsepower. The N-9 weighed 2,400 pounds. He proceeded to scan Oahu for suitable facilities, while selecting Fort Kamehameha as a temporary site for his operation. Final decision was Ford Island in Pearl Harbor, for several reasons: “It had excellent approaches and plenty of water for landings and take-offs. It faced into the prevailing wind and a land airdrome could be easily made. It was within the Red Hill line. It was the cheapest and most available land (really the only available land) that fulfilled all the requirements that we needed.”

(Ford Island consists of 335 acres of land situated in the east lock of Pearl Harbor. In early Hawaii, natives referred to it as Mokuumeume, meaning Island of Strife. Obtained in 1866 by Honolulu physician Doctor Seth Porter Ford, upon his death it was sold to John Ii who developed it into a thriving sugar cane plantation. In 1873, a military commission comprised of the Army’s Major General John M. Schofield and Lieutenant Colonel Burton S. Alexander made a survey of the island of Oahu for defensive possibilities. Their report to Secretary of War Belknap recommended the United States obtain cession of Pearl Harbor, together with its shore for four or five miles back, deeded free of cost to the U.S. in return for allowing Hawaiian sugar to enter the mainland duty free. Ford Island, they stated, would be excellent to accommodate a depot of naval stores and equipment. Proclamation by King Kalakaua on November 9, 1887 granted the United States “exclusive rights to enter the harbor of Pearl River . . . and to establish . . . a coaling and repair station for the use of vessels of the United States, and to that end the United States may improve the entrance to said harbor and to all other things needful to the purpose aforesaid.”)

Curry’s recommendations were approved locally then, also, in Washington. He stated, “I then made the necessary arrangements with the owners, the John Ii Estate, for the purchase of the land and drew up plans for the establishment of a base that would accommodate several squadrons. Estimates amounting to about $1,300,000 were submitted for the establishment of the base and an additional sum of about $325,000 for the purchase of the Island.”

Later that month, 50 men from Rockwell Field, California, were transferred to the 6th Aero Squadron. One enlisted man deserted but Captain John B. Brooks arrived with the remaining retinue aboard the SHERIDAN on March 18. That day Captain Curry enacted his organization and assumed control and command of the 6th. However, there was no action on Ford’s purchase. When Curry returned to the mainland for reassignment (August 1917), he followed up on his recommendation and managed to obtain final approval for Ford Island’s purchase. On September 25, the 6th Aero Squadron abandoned Fort Kamehameha and moved to the new site, under Brooks’ command.

Air Corps in the Hawaiian Islands Report by Capt. John Curry on his efforts to establish the Air Corps in Hawaii, 1924.